Abeggist Abeggist is your news, entertainment, music fashion website. We provide you with the latest breaking news and videos straight from the entertainment industry
Home virals Nigerian lady allegedly Comm!ts Su!cide after the Married Man she’s dating Broke up with Her (video) A Nigerian lady simply identified as Kemi reportedly committed suicide after discovering that her married lover was cheating on her.

It was gathered that Kemi a young lady who was in love and dating a married man was left heartbroken on discovering that she wasn’t his only side chick.

She recently realized that her married lover was dating three other girls in their group chat. Devastated, the heartbroken lady reportedly committed suicide by drinking sniper.

A Twitter user @olukay99 who claimed to be a friend of the deceased, sharing the heartbreaking incident on the platform wrote,

”So, Kemi killed herself because of a married man… She was dating the married man, married man was not returning the same vibe and energy because he was dating 3 other girls in their group chat, Kemi drank snipper yesterday

Kemi was my friend, I feel so bad and disappointed.” 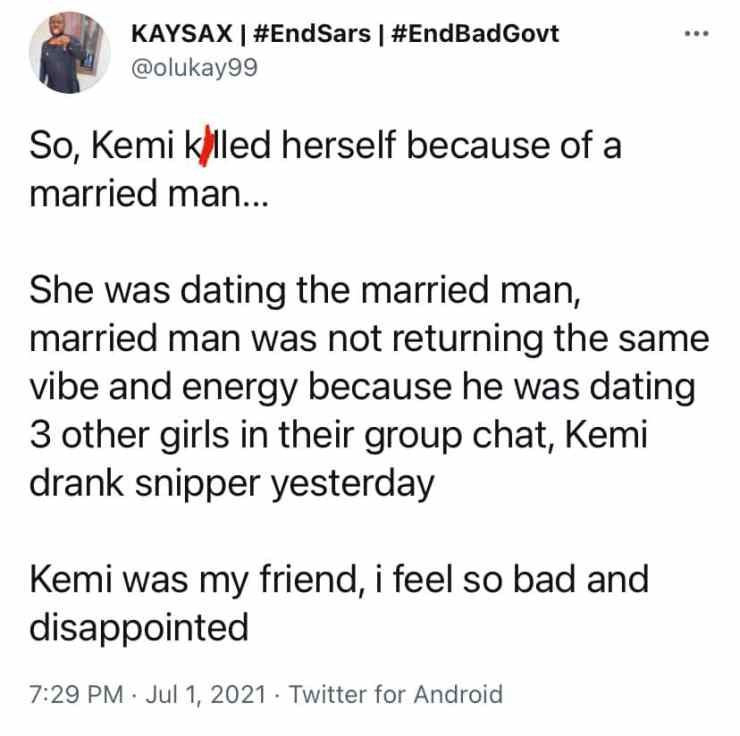